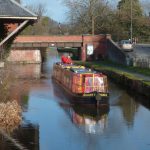 The Canal was used mainly for the transportation of  limestone for agricultural purposes and was never really profitable. The coming of the railways also had a negative effect as there was now competition for freight.

The end came when a breach occurred near the Perry Aqueduct and boats could no longer navigate along the canal. Final closure came in 1944.

Since the 1960's there has been an ongoing desire to reopen the canal to boats and various sections are now navigable. Work has also taken place along parts of the towpath to encourage walkers and cyclists.